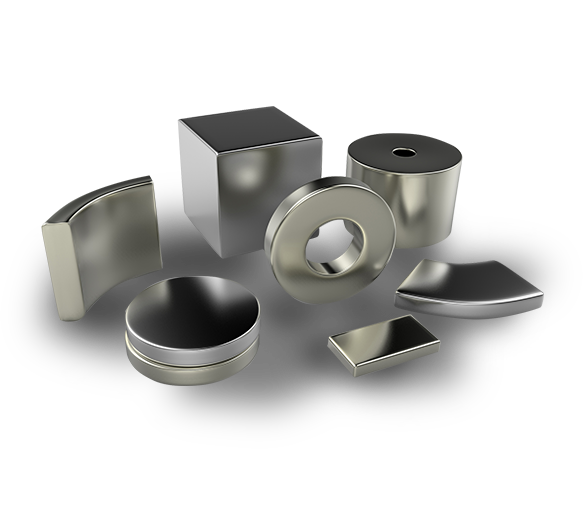 Neodymium magnets are some of the most powerful magnets in the world due to their properties as rare earth magnets. As rare earth magnets, they are derived from rare earth elements that, despite their name, are actually quite abundant as a natural resource. The designation of “rare earth” is a reference to the fact that they are unevenly distributed through the earth’s crust as opposed to materials mined in seams such as coal and copper. The first step in making neodymium magnets is, of course, mining the raw neodymium material from the earth. From there, the manufacturing process begins.

There are two main methods for manufacturing neodymium magnets. One method is the rapid solidification or bonded magnet process, which is used to make compression bonded and injection molded magnets.

Neodymium magnets are not composed of pure neodymium—rather, they are made of an alloy. Typically, a neodymium magnet is composed of neodymium (Nd), iron (Fe), and boron (B). Once the raw materials have been gathered, they are melted in a vacuum induction furnace in order to combine the separate elements into one alloy material. A vacuum induction furnace works to generate heat by using electrical eddy currents, while its vacuum system protects the magnetic material within from being contaminated.

Next, the mixture is placed in molds where it can cool and form into ingots. Once the ingots have solidified, they are pulverized by jet milling. Jet milling grinds the ingot into grains that are typically only three microns in size—as small as a red blood cell, and nearly 100 times smaller than a single grain of sand. This incredibly fine powder is then placed into a mold and pressed while magnetic energy is applied to it. While the mixture is pressed, the direction of magnetism is locked in, aligning the direction of magnetism parallel to the direction it is pressed in.

The hardness of these newly machined neodymium magnets makes them highly vulnerable to chipping and breaking. Because of their brittle nature, as well as their vulnerability to corrosion, neodymium magnets must be plated with a protective coating. Most commonly, nickel plating is used, although they can also be coated with other metals, rubbers, plastics, and epoxies.

Finally, after a neodymium magnet has been plated, it reaches its final stage in the manufacturing process—re-magnetization. The magnet is placed within a coil where an electric current passes through, producing an incredibly powerful magnetic field that is many times stronger than the required strength of the magnet. This electrical current is active for only a brief moment, yet it results in a neodymium magnet that will provide great strength for years to come. After this step, all magnets undergo a rigorous quality assurance review, where they are checked for any imperfections before being sent out.

To learn more about our many different kinds of neodymium magnets, contact us today.